Sector risks remain under pressure in the emerging markets

Global growth at half-mast (2.7% projected by Coface for 2016), under the impact of the highly volatility financial markets and continuing low oil prices, is compromising the health of industries analysed by Coface. Sectors that are dependent on business investment are more at risk, especially those in emerging Asia, Latin America and North America. Conversely, in both advanced and emerging economies, those tied to household consumption are the least affected. Weak growth in global trade (1.8% for the year to end February 2016) is another source of vulnerability. The pace of trading has slowed sharply since August 2015 (3%) and is particularly affecting carriers, especially shipping (80% of global trade).

While none of the six regions analysed by Coface have been spared by the ever more challenging world economy, Europe is enjoying positive internal momentum. Central Europe continues to post lower risk than other regions, despite the chemical sector being downgraded to "medium risk", due to the Chinese slowdown and the contraction of activities in Russia.

Activity in Western Europe is good, thanks to acceleration in consumption, which is the main engine of European growth. Both of the upgrades made by Coface this quarter concern this region.

The downgrade in textiles and clothing in Western Europe to "high risk" is underlined by the rise in insolvencies (+1.3%) in France in 2015.

A WAVE OF DOWNGRADES, IN BOTH ADVANCED AND EMERGING COUNTRIES

The majority of the updates this quarter were downgrades. With chemicals in Central Europe and textiles and clothing in Western Europe, they totalled nine.

Metals have seen its assessment updated for the second time since the end of 2015, with credit risk becoming "very high" in Latin America and the Middle East. This movement followed a recent drop in the prices of primary metals, which is impacting business margins. This makes metals the riskiest sector in the world.

Also in Latin America, pharmaceuticals have been downgraded to "medium risk" in the context of very strong contractions in investment by oil companies (Petrobras: -24.5% over the 2015-2019 period; Ecopetrol: - 40% in 2016), which led to cuts in public spending, thus penalising consumption. The para-pharmaceutical segment should be the hardest hit, but public policies on drug reimbursement could also be amended and weaken the industry's players.

Contrary to Latin America, North America’s energy sector does not represent a "systemic" risk to the region. However, the situation is worsening. 2015 saw the first cut in production of shale oil since the start-up of its development and the sector’s business margins are in free fall. Even if forecasts look positive from the demand side, given the low oil prices, risk for the North American energy sector is becoming "very high".

The automotive industry in North America has also seen a change in its risk assessment, now at "medium risk". While growth in auto sales could remain positive (though still not comparable to 2015), the risks associated with "subprime" and "deep subprime" consumers are increasing. In addition to shrinking credit, the rise in interest rates approved by the Fed in December 2015 is impacting the cost of variable-rate loans (9 new vehicles out of 10 are financed on credit). Moreover, average loan periods are growing to 6 years, meaning that borrowers are excluded from the market for long periods, thus accentuating the loss in their vehicles’ residual resale values.

Emerging Asia is beginning to show signs of saturation on the electronics market. This is particularly the case with PCs and tablets, the sales of which continue to contract. An increase in late payments is prompting a health watch on two connected sectors: those of retail, downgraded to "medium risk" and ICT, downgraded to "high risk". 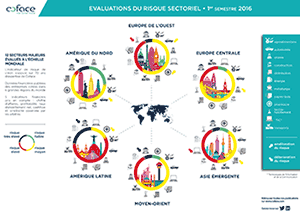