The paradox of corporate insolvencies in Europe: Miracle and mirage

The economic crisis caused by the COVID-19 pandemic heralded major business failures and insolvencies in France, and across the eurozone as a whole.. But, in 2020, and even if the real impact of the COVID-19 crisis remains uncertain, the number of insolvencies actually fell in all major European economies. According to research by Coface, a leading player in credit insurance, the gap between the expected deterioration of the companies’ financial health and the number of insolvencies suggests that there is a high number of  "hidden insolvencies" that have been postponed, rather than prevented. This suggest that, in both France and Europe, there is high number of unviable companies whose failure is only a matter of time.

A similar trend in the main eurozone countries

In France, the fate of 22,000 companies remains unresolved: these "hidden insolvencies" are expected to gradually materialise between now and 2022. Coface estimates the number of hidden insolvencies at 8,600 in the construction sector, 1,800 in retail, 1,500 in manufacturing, 1,200 in business services and 800 in transport. So far, although the economic crisis has affected sectors unevenly, the number of insolvencies has fallen in all sectors, including those that have been at a standstill for several months. Similarly, all French regions recorded a clear fall in the number of insolvencies in 2020, ranging from 34% in Brittany to 49% in Corsica. In France, without the country’s Solidarity Fund, the operating result of the hospitality and catering sector would have contracted by an estimated 109%, instead of the 17% observed in Coface's results. The impact of insolvencies on job losseswas nevertheless limitedat 126,000, the lowest level since 2006.

In Germany, Coface estimates the number of hidden insolvencies to be 21% below their 2019 level (at around 3,950 insolvencies). At the start of the pandemic, Coface expected insolvencies to rise by 9% over 2020, but they ended up falling by 15%.This result is partly due to the the German government temporarily imposing a moratorium on insolvency proceedingsto give stimulus measures time to take effect. However, the German metal and automotive sectors, both of which have been in recession since well before the pandemic, have seen an increase in insolvencies compared to 2019.

In Spain,furloughs have proved effective. For example, in the retail sector, Coface simulations indicate that furlough measures limited the fall in profits to -26% in the second quarter, compared with -67% had they not been put in place. These measures have nevertheless failed to prevent a meteoric rise in insolvencies in the tourism sector, 90% up year-on-year in the second half of 2020. Globally, Spanish hidden insolvencies are estimated to be around 1,600 (34% of their 2019 level).

In Italy, Coface estimates the size of hidden insolvencies at around 39% of their 2019 level(or 4,100 insolvencies). According to Coface’s calculations, however, insolvencies should have increased by 7%.

Not all of the hidden insolvecies are expected to manifest in 2021. The continuity of insolvency moratoriums, aid measures, and support from banks will be decisive.The insolvency “catch-up” process from 2021 onwards will directly correlate with the rate at which restrictive measures end, which in turn will be determined by the speed at which vaccinations are rolled out. This process will also depend on states’ willingness to continue providing support, especially as the vast majority of companies will only beginto repay state-guaranteed loans from 2022 (as is the case in France, for example). 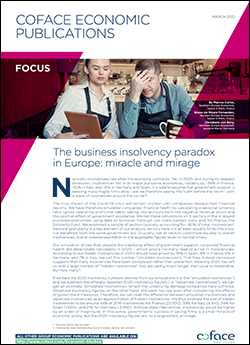 Download this press release : The paradox of corporate insolvencies in Europe: Miracle and mirage (702.04 kB)


Publication: The business insolvency paradox in Europe: Miracle and mirage