Examining the euro, 20 years on

To mark the 20th anniversary of the euro’s introduction into European wallets, Coface's economic research team has examined the effects that this change has had in macroeconomic terms.

When the euro was introduced, expectations were very high, especially with the elimination of exchange rate risk and transaction costs. However, there is little evidence that the euro has stimulated trade Intra-area trade was already substantial  at the launch of the euro (50% of total trade in the 12-member eurozone), and this proportion has even decreased slightly since then. This is attributable to the emergence of China in global trade over the period, and later, to the the rise of the German-Central European Supply Chain.

In the 1990s, nominal interest rates had converged, and spreads were very small at the time of the launch of the euro. After a decade of stability, spreads vis-à-vis Germany exploded after the 2008-2009 financial crisis and the European sovereign crisis, when markets started to differentiate credit risk between European countries again and realised that some of them could default. Spreads compared to the Bund thus rose until the European Central Bank President pledged to “do whatever it takes” to preserve the euro. It is important to note that many countries now enjoy much more favourable financing conditions than if they were not in the Economic & Monetary Union. 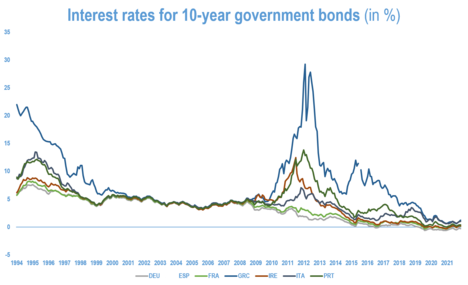 Inflation rates in the eurozone have been lower over the last decade in a global de(in)flationary environment.  While inflation rates converged drastically – towards the rates of low-inflation countries – during the period of qualification for the euro (1990s), their dispersion remained relatively stable over the following 20 years.

In general, real convergence – in terms of productive structures and per capita incomes – did not take place between the first countries to adopt the euro. Most of the high-income countries thus recorded higher per capita GDP growth over the period.

While Greece and Spain were converging before the financial crisis, this was not the case for Portugal and Italy, which clearly underperformed over the whole period.

After the introduction of the euro, the large financial flows that were directed towards low-income countries did not generate convergence in terms of productivity because they went to low-productivity sectors, such as services or construction.

The international role of the euro has remained broadly stable since the global financial crisis and the sovereign debt crisis in the eurozone. The euro remains the second most important currency in the world, but is far from competing with the US dollar.

The share of the euro in foreign exchange reserves, debt securities, loans or deposits is about the same as when it was introduced, with an increase in the first few years and a sharp decline after the sovereign debt crisis. About 70% of debt securities issuance was denominated in US dollars in 2020, compared with 20% in euros (a level comparable to 1999

The record of the first two decades of monetary union is far from perfect - even if, given its incompleteness and initial criticisms, EMU has beaten the most pessimistic predictions.

In recent years, its architecture has been strengthened, notably with the Banking Union and the European Stability Mechanism, and the whole is more resilient. But there is still much to be done in terms of governance to make this union more efficient and more resistant to external and/or idiosyncratic shocks – especially since labour mobility remains low and real convergence, to a large extent, a myth. In particular, fiscal federalism (the Fiscal Union) remains an objective (beyond the European Recovery Plan and considerations on budgetary rules), but its realisation in the short term unfortunately still seems out of reach.


U.S.Economy: an infrastructure package to support the recovery [#ExpressEco]