Domestic demand is the main source of growth

After slowing slightly in 2018, mainly due to weak performance during the third quarter of the year, Norwegian growth is expected to pick up again in 2019. Activity will be boosted by household consumption, which will benefit from the gradual reduction in the unemployment rate (4% in September 2018) and an increase in wages. Another positive factor will be the reduction in inflation, driven notably by monetary policy tightening by Norges Bank, the Norwegian central bank. Private investment will be buoyed by the lower corporate tax rate and a high capacity utilisation rate (79.2% in the third quarter of 2018). At the same time, real estate investment will continue to suffer from the high level of Norwegian household debt (236% of disposable income in 2017), and cooler growth in real estate prices. In addition, the slowdown in economic growth in Europe, particularly in the United Kingdom, could affect Norwegian exports (hydrocarbons, fish, aluminium, mechanical and electrical equipment and ships), since 21% of exports go to the UK. Mainland GDP, which excludes hydrocarbon production and shipping, is expected to grow by 2.7% in 2019. The energy sector – based on offshore oil and gas, and representing 17% of GDP, 19% of investments, and 43% of exports – will also contribute to the brighter pace of growth through oilfield development projects, such as the Johan Sverdrup project. However, despite the improvement in hydrocarbon prices, investment in exploring for new fields will remain moderate.

A solid financial situation that owes much to oil and gas

Fiscal policy is focused on promoting growth, creating jobs and diversifying the economy to reduce the country's dependence on the energy sector. In 2019, growth in budgetary spending is not expected to accelerate, allowing the government to post a comfortable surplus. However, the inclusion of the Liberal Party (Venstre) in the coalition government will result in increased spending on environmental protection. The budgetary rule limiting withdrawals from the sovereign wealth fund (SWF) to 3% of the fund’s return will be respected. In addition, the policy of attracting foreign investment is to continue, leading the government to lower corporate taxes, notably by reducing the tax rate by one percentage point (23% to 22%). Measures to expand tax bases, along with increased revenues from oil activities, will offset this decline. Despite the push to diversify the economy, the non-oil deficit will amount to 7% of GDP, illustrating the dependence of public finances on oil revenues and SWF dividends. The burden of public debt will remain moderate, in a country with the world’s largest SWF. However, the fund’s return on investment (ROI) seems to be on a downward phase, which raises questions about the future management of public expenditure, which is indexed to the ROI. In the second quarter of 2018, the fund’s ROI was lower than expected by the government.

The current account surplus is expected to remain high in 2019, mainly due to the goods balance, which stood at 5.5% of GDP in 2017. Indeed, despite the brisk showing by imports, reflecting vigorous domestic demand, exports – concentrated around oil, natural gas and salmon – will remain much higher. The current account surplus will also be supported by the income surplus (4% of GDP in 2017), linked to the wealth fund's foreign investments, while the deficit in transfers – attributable to the country's contribution to the European budget and aid to developing countries – will have an adverse effect. The current account surplus will likewise be reduced by the deficit in the balance of services related to oil production.

Following the parliamentary elections held in September 2017, the Liberal Party joined the Progress Party and the Conservative Party in the governing coalition in January 2018. When the Liberals came onboard, the government adopted a more environmentally-oriented programme, including protection for natural areas coveted by the oil industry. The Christian Democrats (KrF), meanwhile, refused to participate in the government. Despite the support of the eight Liberal MPs, the government therefore still has a minority in Parliament, holding 80 seats out of 169. However, on November 2, 2018, the KrF voted against supporting the opposition at an extraordinary party congress. The government still seems hopeful of getting the KrF to join the coalition, which would give it eight additional seats and thus a parliamentary majority. With this in mind, the government has proposed reforming the abortion law by banning terminations after the normal 12-week period, even in cases where the child might have a serious illness. The government is therefore fragile and could be brought down by the KrF’s position.

Bank transfers are by far the most widely used means of payment. All leading Norwegian banks use the SWIFT electronic network, which offers a cheap, flexible and quick international funds transfer service.

Electronic payments, involving the execution of payment orders via the website of the client’s bank, are rapidly gaining popularity.

Bills of exchange and cheques are neither widely used nor recommended, as they must meet a number of formal requirements in order to be valid. In addition, creditors frequently refuse to accept cheques as a means of payment. As a rule, both instruments serve mainly to substantiate the existence of a debt.

Conversely, promissory notes (gjeldsbrev) are much more common in commercial transactions, and offer superior guarantees when associated with an unequivocal acknowledgement of the sum due that will, in case of subsequent default, allow the beneficiary to obtain a writ of execution from the competent court (Namrett).

The collection process commences with the debtor being sent a demand for the payment of the principal amount, plus any contractually agreed interest penalties, within 14 days.

Where an agreement contains no specific penalty clause, interest starts to accrue 30 days after the creditor serves a demand for payment and, since 2004, is calculated at the Central Bank of Norway’s base rate (Norges Bank) in effect as of either January 1 or July 1 of the relevant year, raised by seven percentage points.

In the absence of payment or an agreement, creditors may go before the Conciliation Board (Forliksrådet), a quasi-administrative body. To benefit from this procedure, creditors must submit documents authenticating their claim, which should be denominated in Norwegian kroner.

The Conciliation Board then allows the debtor a short period to respond to the claim lodged before hearing the parties, either in person or through their official representatives (stevnevitne). At this stage of proceedings, lawyers are not systematically required. The agreement therefore reached will be enforceable in the same manner as a judgement.

If a settlement is not forthcoming, the case is referred to the court of first instance for examination. However, for claims found to be valid, the Conciliation Board has the power to hand down a decision, which has the force of a court judgement.

A case which is referred to the higher court will commence with a summons to appear before the municipal or District Court. The summons will be served on the debtor with an order to give the court notice of intention to defend if he so wishes.

Where a defendant fails to respond to the summons in the prescribed time (about three weeks) or fails to appear at the hearing, the Board passes a ruling in default, which also has the force of a court judgement. The length of proceedings varies from one court to another.

More complex or disputed claims are heard by the court of first instance (Byret). The plenary proceedings of this court are based on oral evidence and written submissions. The court examines the arguments and hears the parties’ witnesses before delivering a judgment.

Norway does not have a system of commercial courts, but the Probate Court (Skifteret) is competent to hear disposals of capital assets, estate successions, as well as insolvency proceedings.

Enforcement of a court decision

A domestic judgment is enforceable for ten years if it has become final. If the debtor does not comply with the judgment, the creditor can request compulsory enforcement of the judgment from the enforcement authorities, which will then seize the debtor’s assets and funds.

Even though Norway is not part of the EU, particular and advantageous enforcement mechanisms will be applied for awards issued by EU countries, such as EU payment orders or the European Enforcement Order, under the “Brussels Regime”. For decisions rendered by non-EU members, they will be enforced on a reciprocity basis, provided that the issuing country is party to a bilateral or multilateral agreement with Norway.

Private non-judicially administered reorganizations are common in Norway; even though there are not regulated by law. Debtors and creditors are free to make any kind of arrangements, but in practice the Debt Reorganization and Bankruptcy Act is often applied. A third party (a lawyer or an accountant) can handle the process if the parties wish it so.

Proceedings can be opened by court decision either from the debtor or creditor. The latter must guarantee for expenses related to the proceedings. The court will appoint a trustee and assess the need for a creditor committee prior to issuing a bankruptcy order and given the creditors time to file their claim (three to six weeks). All of the debtor’s assets are confiscated, the debt is evaluated and a list of claims is established. 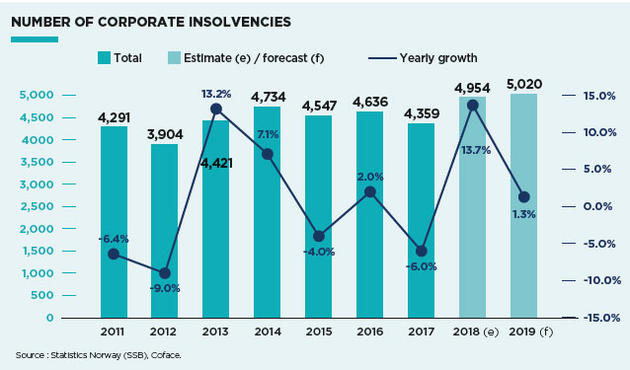