Growth will remain close to potential in 2019

Activity decelerated sharply in 2018, to the point of falling slightly in the third quarter. Exports had to cope with softer global demand and the impact of the US-China trade dispute, while automotive production was down nearly 10% in the third quarter compared with the previous quarter (before rebounding) due to delays in certifying vehicles under the new global emission standards that came into force on September 1, 2018. Accordingly, growth reverted to the economy's potential rate of expansion and is expected to remain at that level in 2019. Trade is set to make a negative contribution to trade again, with imports outpacing exports in line with brisk domestic demand. The imposition of a tax by the United States would affect German car exports to the United States (0.9% of GDP). On the domestic side, household consumption (53% of GDP) is poised to benefit from wage growth and an accommodative fiscal policy. Wages are driven by the low level of unemployment (3% expected, 6% among young people), the increase in the number of job vacancies (1.9% of total employment at the end of 2018) and the reduction in the number of immigrants whose employability is below that of the overall labour force. In accordance with the government’s coalition agreement, pensions for mothers will go up again, as will benefits for dependent children, with, in particular, the introduction of the Baukindergeld, a subsidy based on the number of children and designed to help parents buy a home. The tax threshold will also be raised, while social contributions are to be further reduced. Together, these measures would represent 0.6% of GDP. Nevertheless, the increase in real disposable income will be limited by the inflation generated by low spare capacity and its corollary, higher labour costs. This expansionary fiscal stance will also extend to public spending on early childhood care, primary education, refugee integration, broadband, infrastructure, and social housing, since public investment has fallen to a low level. Conversely, private investment (17% of GDP) will be less vigorous, despite the low cost of financing and the high level of capacity utilisation. Faced with international uncertainties (trade disputes with consequences for the value chains in which the country is highly involved, Brexit, sanctions against Russia, concerns about several major emerging economies), confidence has waned among business leaders since peaking at the end of 2017. Housing construction is facing capacity saturation, particularly at the labour level.

In this context, the payment behaviour of German companies is expected to remain generally good. As a result of high profits, as well as dividend and investment moderation, their debt has fallen to a low level. The number of corporate insolvencies, at its lowest level since 1999, is expected to decline only slightly at best.

Despite slight fiscal easing, the government balance is expected to continue to show a small surplus, due to the positive impact of buoyant activity on revenues. Likewise, revenues will benefit from the increase in environmental taxes. In addition, debt servicing, which is set to fall below 60% of GDP, is costing less and less (1% of GDP). The current account surplus is expected to shrink further in line with the trade surplus (7% of GDP). The balance of services shows a small deficit, due notably to spending by German tourists. The income balance will remain in surplus: the income generated by the country’s considerable foreign investments, which continue to grow on recurring current account surpluses, exceeds outgoing remittances by immigrants and investors. The country has a net creditor position vis-à-vis the rest of the world equal to 60% of GDP.

Following the parliamentary elections of September 2017, negotiations resulted in a renewed Grand Coalition government in February 2018, bringing together Conservatives (CDU-CSU) and Social Democrats (SPD), based on a 170-page agreement. Already under pressure because of her narrow majority in the Bundestag and the breakthrough of the far right (AfD), which has pushed the right wing of the CDU and the Bavarian CSU to up the ante, Chancellor Angela Merkel saw her position weakened by the poor results of the coalition parties in several regional elections and by excellent showings for the Greens and the AfD. She resigned as CDU leader in December 2018, but intends to see her term out, i.e. until 2021. Much will depend on the upcoming regional and European elections, the SPD's attitude when reviewing the coalition agreement at the end of 2019 and the stance of the new CDU presidency. The choice of Annegret Kramp-Karrenbauer, a centrist reputed to be close to the Chancellor, as head of the CDU, reflects a preference for continuity and an eye to the future, including a possible alliance with the Greens if the SPD withdraws from the coalition. 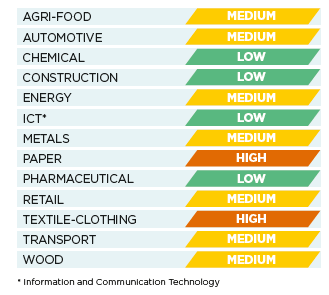 Bank transfer (Überweisung) remains the most common, means of payment. All leading German banks are connected to the SWIFT network, which enables them to provide a quick and efficient funds transfer service. The SEPA Direct Debit Core Scheme and the SEPA Direct Debit B2B are the newest forms of direct debit.

Bills of exchange and cheques are not used very widely in Germany as payment instruments. For Germans, a bill of exchange implies a critical financial position or distrust in the supplier. Cheques are not considered as payment as such, but as a “payment attempt”: as German law ignores the principle of certified cheques, the issuer may cancel payment at any time and on any grounds. In addition, banks are able to reject payments when the issuing account contains insufficient funds. Bounced cheques are fairly common. As a general rule, bills of exchange and cheques are not considered as effective payment instruments, even though they entitle creditors to access a “fast track” procedure for debt collection in case of non-payment.

The amicable collection is an essential step to the success of collection management. The collection process generally begins with the debtor being sent a final demand for payment, via ordinary or registered mail, reminding the debtor of their payment obligations.

According to the law for the acceleration of due payments (Gesetz zur Beschleunigung fälliger Zahlungen) a debtor is deemed to be in default if a debt remains unpaid within 30 days of the due payment date and after receipt of an invoice or equivalent request for payment, unless the parties have agreed to a different payment period in the purchase contract. In addition, the debtor is liable for default interest and reminder fees upon expiry of this period.

Debt collection is recommendable and common practice in Germany.

Provided the claim is undisputed, the creditor may seek order to pay (Mahnbescheid) through a simplified and cost-efficient procedure. The creditor describes the details of their claim and is subsequently able to obtain a writ of execution fairly quickly via the Online-Dunning Service (Mahnportal), direct interfaces or (only for private individuals) pre-printed forms. Such automated and centralised (for each Bundesland, federal state) procedures are available all over Germany.

This type of action falls within the competence of the local court (Amtsgericht) for the region in which the applicant’s residence or business is located. For foreign creditors, the competent court is the Amtsgericht Wedding (in Berlin). Legal representation is not mandatory.

The debtor is given two weeks after notification to pay their debts or to contest the payment order (Widerspruch). If the debtor does not object within this timeframe, the creditor can apply for a writ of execution (Vollstreckungsbescheid).

During ordinary proceedings, the court may instruct the parties or their lawyers to substantiate their claim, which the court alone is then authorised to assess. Each litigant is also requested to submit a pleading memorandum outlining their expectations, within the specified time limit.

Once the claim has been properly examined, a public hearing is held at which the court passes an informed judgement (begründetes Urteil).

The losing party will customarily bear all court costs, including the lawyer’s fees of the winning party to the extent that those fees are in conformity with the Official Fees Schedule (the Rechtanwaltsvergütungsgesetz, RVG). In the case of partial success, fees and expenses are borne by each party on a pro rata basis. Ordinary proceedings can take from three months to a year, while claims brought to the federal Supreme Court can reach up to six years.

Enforcement of a Legal Decision

Enforcement may commence once a final judgement is made. If debtors fail to respect a judgment, their bank accounts may be closed and/or a local bailiff can proceed with the seizure and sale of their property.

For foreign awards, in order to obtain an exequatur, the creditor needs a notarised German translation of the decision which also has to be recognised, an enforcement order of this judgment, and an execution clause. Judgments of courts of EU member states are recognised without further procedure – unless certain restrictions arising from European law are applicable.

Debtors may attempt to renegotiate their debts with their creditors, which helps to protect debtors from early payment requests. However, the procedure is in the creditors’ interest as it can be faster and tends to be less expensive than formal insolvency.

Following a petition filed before insolvency court on the basis of illiquidity or over-indebtedness, the court may open preliminary insolvency proceedings, where it appoints a preliminary administration aimed at exploring the chances of restructuring the company. If the administration authorizes this restructuration, it then initiates formal proceedings and nominates an administrator in charge of continuing the debtor’s business whilst preserving its assets.

Liquidation may be initiated upon demand of either the debtor or the creditor provided that the debtor is unable to settle its debts as they fall due. Once recognized through a liquidation decision and once the company has been removed from the register, the creditors must file their claims with the liquidation administrator within three months of the publication.

This is a written clause in the contract in which the supplier will retain the ownership over the delivered goods until the buyer has made full payment of the price. There are three versions of this retention: 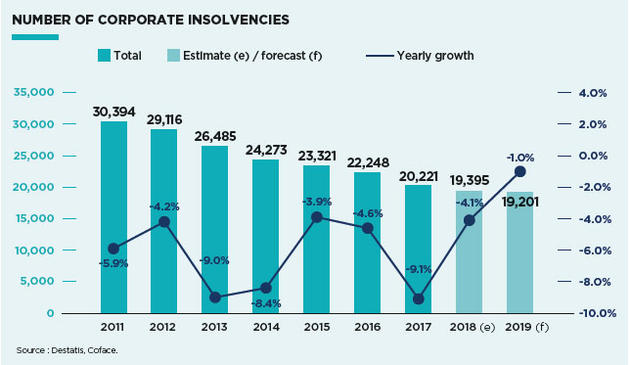